It's no secret we love bicycles or more particularly the positive difference they can make to cities - to our health, reducing congestion, revitalizing local retail, and helping our streets become more orientated around people, than cars.  Not to mention the nano carbon footprint.

In fact bikes are good for everyone - even people who never ride them.

Oakland is that place that a few confused statesiders have not ended up in when their disembarked in Auckland. Otherwise known as part of the East Bay, across the harbour from their better known cousins San and Fran.

Oakland based cycle advocates Bike East Bay have rocked Drupal and CiviCRM since way back when. A few years back we'd gotten called in to do some tidying and tech updates, and keep an eye on things going forward.

It was clear that while the East Bay folks where very happy with the Drupal platform, a comprehensive responsive Drupal 7 upgrade and redesign was needed - on a budget that weighed in close to their carbon emissions.

Eventually, in concert with an identity refresh by a local Oakland crew, we tucked in, working along side Fuzion folks at the CivioCRM end - focusing heavily on engaging users with the organisations numerous campaigns.

The site still carries some of the baggage of a long amateur hour drupal history, but it's working hard, and well. So well we were chuffed to hear Bike East Bay had one Yes On BB campaign to see a Billion dollars devoted to active transport in their area. 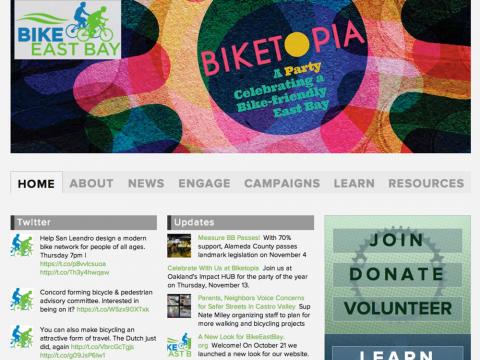